(Bassariscus astutus) Ringtails were kept as pets by miners in Big Bear during the gold rush era. 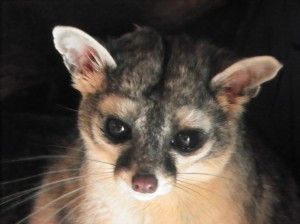 The oldest Ringtail on record in captivity was 16 years old.

How many babies do they have?

They can have between one and four babies, but two is common.

Where do they live?

Ringtails are found from Oregon down through Northern Mexico on the west coast and east through Texas and Oklahoma.

Interesting facts on the Ringtail:

Ringtails at the Zoo

Luna – a female, came from Arizona in 2011. Her mother was removed from a business by animal control and Luna was found in a wall a day later. She was very young and she imprinted on humans, so she cannot be released back to the wild.