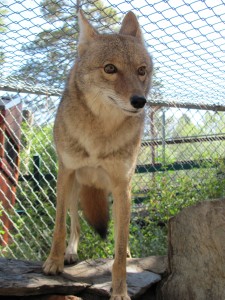 (Canis latrans)   In order to avoid being detected by predators, coyotes can walk on their toes to make as little noise as possible.  On another note, coyotes can be extremely loud.  Our coyotes love to howl with our keepers and the wolves. When everyone gets going it is really something to hear.

What does the Coyote eat?

How many coyotes can be born at a time?

In the spring, 3 to 12 pups are born at a time. Both parents feed and protect the pups.

Over most of North America.

The coyote reaches a respectable speed of 40 miles per hour.

Coyotes at the Zoo

Lyric  – is our oldest coyote; he came to us in 2005 when he was about six months old. Someone was keeping him as a pet and he ran away. He was trying to play with people and some residents caught him and brought him to the zoo.

Bonzai – came to us from the Fund for Animals as well. Someone had him as a pet and he also could not be released to the wild.

Samba – A female came to us in 2013 when she was only a few weeks old.  She weighed only 2.4 pounds and was near death, due to anemia, parasites and various other problems.