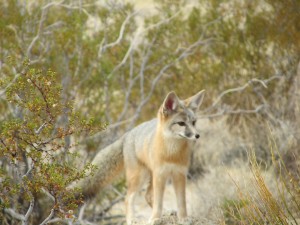 In 2011, five young kit foxes were confiscated by Fish and Game from an individual that was trying to sell them as pets. They were brought to the Big Bear Alpine Zoo for care for until they were old enough to be released. We took care of them for several months, making sure that there was as little interaction between the foxes and the keepers as possible.

When they were about five months old, they were ready to be released back into the wild. We found a beautiful area in Landers, California, where they came from that had lots of rocks and caves for them to explore. All five of them stayed together and were darting in and out of all the holes in the rocks. Eventually, they all wandered off together and we would only catch a glimpse of one or two in the distance. It was one of the most satisfying releases we have ever done.