(Taxidea taxus)  Badgers are so agressive they have been known to back down bears when confronted.  Our Badger Lotus loves frozen rats and plays with them for awhile when she is given one. Read More 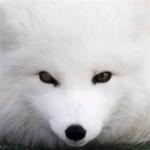 (Vulpes lagopus)  Artic Foxes have the warmest fur of all the mammals.  We will always wonder how it came to be that Aurora Borealis ended up on a roof in Beverly Hills! Read More 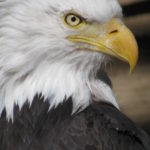 (Haliaeetus leucucephalus) The bald eagle, with it’s snowy-feathered (not bald) head and white tail, is the proud national bird of the United States.  We love hearing the amazing call of the eagles throughout the zoo. Read More

(Tyto alba)  If you are looking for a barn owl, listen for their eerie, raspy calls, quite unlike the hoots of other owls. Read More

(Ursus americanus)  Black bears are not indigenous to Southern California. They were imported from Yosemite and introduced to the San Bernardino National Forest when the indigenous Grizzly Bear was hunted to extinction in the early 1900’s.  Our black bear have all been rescued and are happy to call Big Bear Alpine Zoo their home. Read More

(Felis rufus)  The cat is named for its tail which appears to be bobbed.  They hunt in stealth fashion and will deliver a deathblow with a leaping pounce that can cover 10 feet.  The bobcats in our care have lots of personality and are full of fun antics. Read More

(Athene cunicularia) The burrowing owl lives underground in tunnels.  The owl pictured is Tremor.  He was found in a backyard in Apple Valley.  Tremor loves his mice and he charges out to get them when it’s feeding time. He is very vocal and thinks he is much bigger than he actually is. Read More

(Branta canadensis) The hatchlings leave the nest to follow mom into the water when they are 1-2 days old!  When Canadian Geese migrate, they form an impressive and aerodynamic “V” formation and they can cover over 1500 miles in 24 hours.   Read More

Princess Bella –a female; was donated to the zoo in 2011; They are best known for their fur used in making luxurious coats. In the 1900’s a ban was imposed on hunting and exporting of chinchillas. In some parts of the world they are still raised for their fur. Chinchillas eat bark, grasses and herbs. Read More

(Canis latrans)   In order to avoid being detected by predators, coyotes can walk on their toes to make as little noise as possible.  On another note, coyotes can be extremely loud.  Our coyotes love to howl with our keepers and the wolves. When everyone gets going it is really something to hear. Read More

Eidelweiss – female; white dove; rescued after a wedding release injury. Lovey – gray dove They are very common birds, found almost everywhere in North America and other countries.  White doves are specifically bred for their color and are sometimes released at weddings because of that color. White doves are actually a type of  pigeon. Read More

(Cervus dama)  Unlike many deer, the Fallow deer prefer to go under an obstacle rather than jump over it.  The fallow deer in our care were confiscated by Fish and Game from someone who had them as pets.  They are now dependent on humans for their food and will live out their lives with us. Read More 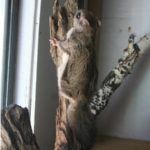 Lichen, Truffles, and Juniper— Our flying squirrels were brought to the zoo as babies, orphaned when their nests were displaced.  Through a partnership with the San Diego Natural History Museum, US Fish and Wildlife, and Forestry Service, Big Bear Alpine Zoo educates the public about the uniqueness of our flying squirrels here in Big Bear.  Read More

(Aquila chrysaetos) The Golden Eagle is sometimes used in Europe to hunt deer, they are so powerful.  They can go into a stoop or dive at about 150 miles per hour. Golden Eagle pairs maintain territories of up to 60 square miles, and they mate for life.     Read More

(Canis lupus) Wolves are legendary because of their spine-tingling howl, which they use to communicate. Wolves have a very complex communication system which includes body language and scent marking as well as vocalizations.   They use this communication system to send messages to each other, their pack and other packs and animals nearby. Read More

(Bubo virginianus) The Great Horned Owl is a very aggressive nighttime hunter and strikes from above. This is why they are sometimes called “tigers of the night.” They use their strong talons to carry animals several times heavier than they are.  Great Horned owls will also kill and eat rattlesnakes. Read More

(Urocyon cinereoargenteus) Grey foxes are the most cat-like of all the canids. They are the only canid that can climb trees. When the Europeans first came to North America, they tried to use Grey Foxes for their fox hunts. The foxes would go straight up a tree and escape the hunters.  Smart little foxes! Read More 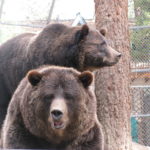 (Ursus arctos horribilis) Grizzly bears are magnificent animals.  They  can be dangerous to humans, particularly if surprised or if humans come between a mother and her cubs.  The male grizzly can weigh more than 1000 pounds and can stand 10 feet tall.             Read More

Dean – male, age unknown Dean was orphaned and hand raised at the zoo.  When it was time to be released back into the wild, it was evident to zoo staff that Dean was unable to fend for himself. Now Dean spends the days serenading the staff and guests with his singing. Lesser gold finches Read More

(Felis concolor) Mountain lions require a lot of room—only a few cats can survive in a 30-square-mile range. They are solitary and shy animals, seldom seen by humans.  Mountain Lions are extremely agile creatures. Their long hind limbs allow them to cover a distance of 40 feet in a single leap.  Read More

(Odocoileus hemionus) Mule deer antlers “fork” as they grow.  The average male deer weighs 200 pounds and the female deer weighs 150 pounds. Deer kill about 150-170 people each year, from car accidents, and because people underestimate how dangerous they really are. Read More

(Procyon lotor) Raccoons are plantigrade animals, walking on the entirety of their foot – heel to toe. Bear and humans do this as well.  Raccoons are highly intelligent and have a manual dexterity that comes close to that of apes. Their long delicate fingers easily open trash cans and doors. Read More

(Corvus corax) These sleek, black birds are excellent and acrobatic fliers on par with falcons and hawks. They are very intelligent and sometimes cooperate to flush out prey when hunting.     Read More

(Vulpes vulpes)  Red foxes come in many different color phases, anywhere from a light yellow to a black phase. They remain this color all their lives.  All red foxes have a white tip on their tail.  Read More

(Buteo jamaicensis) As they circle and soar, they can spot a mouse from 100 feet up in the air—about ten stories high. Read More

(Tupinambis rufescens)  Tegus can run on their hind legs.  They are highly intelligent, learning to recognize their owners, becoming docile and in some cases even ignoring food in favor of social interaction and they love to swim. Read More

Step into the Reptile House and see a wide variety of different types of snakes, lizards, turtles and other reptiles. All the cages are clearly marked and have signage describing the animal.  NOTE: As you can see, most of our reptiles were donated or confiscated from people who tried to keep them as pets.  These Read More

(Bassariscus astutus) Ringtails were kept as pets by miners in Big Bear during the gold rush era. Read More

(Vulpes macrotis mutica) Kit foxes appear to be able to survive without drinking water. This is an adaptation to living in desert conditions where they get almost all of their water from their prey. Read More

(Grus canadensis) During mating, pairs vocalize in a behavior known as “unison calling.” They throw their heads back and unleash a passionate duet—an extended litany of coordinated song. Read More 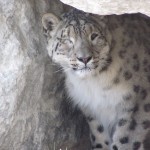 (Uncia Uncia)  What does the snow leopard eat?   Snow leopards eat meat.  They primarily hunt wild sheep and goats. Snow leopards are also known to eat smaller animals like rodents, hares and game birds.   How long do they live?    Snow leopards have been known to live up to 21 years in captivity.  In Read More

(Nyctea scandiaca) Snowy owls have keen eyesight and great hearing, which can help them find prey that is invisible under thick vegetation or snow cover. Read More

Chai and Macha  –  Rescued in 2014. These skunks have two stripes down each side joining into one at the back of the head.They are omnivorous and eat mostly insects, worms, snails, and mice. Most predatory animals leave the skunk alone for fear of being sprayed, except for the great horned owl which has a Read More