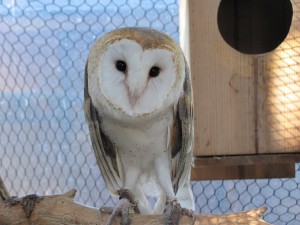 (Tyto alba)  If you are looking for a barn owl, listen for their eerie, raspy calls, quite unlike the hoots of other owls.

What does the barn owl eat?

Barn Owls eat mostly small mammals, particularly rats, mice, voles, lemmings, and other rodents; also shrews, bats, and rabbits. Most of the prey they eat are active at night, so squirrels and chipmunks are relatively safe from Barn Owls.

About 14 years in captivity and 3 years in the wild.

How many barn owls can be born at a time?

Barn Owls do not make nests, they simply find suitable sites to lay eggs. The female usually lays 3 to 6 eggs, but can lay up to 12.

Barn Owls live in open habitats across most of the lower 48 United States and extend into a few parts of southern Canada (as well as in much of the rest of the world).

Barn Owls nest and roost in cavities, abandoned barns and other buildings, and dense trees. At night, Barn Owls hunt by flying low, back and forth over open habitats, searching for small rodents primarily by sound.

Barn Owls at the Zoo

Screamer – and his nest mate were left outside our gate anonymously by someone who had them as pets. Screamer was imprinted, but his nest mate was not, so we were able to release her.